It’s all very well to say that currently India at 7.3% and Bangladesh at 7.4% enjoy a higher GDP growth rate than China at 6.8% and the rest of the major economies. There are three flaws in this kind of breast beating. The first is that the integrity of the Indian economic and social data gathering and processing have been totally undermined in the past four years, so that the current GDP number given out by the government should perhaps be discounted by 1.5 to 1.8%.

As a guide, IppStar’s (www.ippstar.org) continuous research of the print industry certainly reflects an appreciable tightening of the economy, which would not likely be there if the real GDP growth rate (not the nominal rate which includes the inflationary prices of raw materials and labor) was significantly above 6%. Skeptics may ask, in that case, why is there continued investment in print and packaging equipment manufacturing and in equipment and capacity creation by printers and converters?

The answer is that while there is some significant investment in equipment manufacturing, technology license agreements, and automation, it is mostly on the packaging side for which strong future growth cases can be made in spite of the current squeeze on margins. These cases fall into consumption led growth and not really capex in heavy machinery or infrastructure which are still struggling for investment.

Although one is impressed by several greenfield packaging plants with investments of Rs. 120 crore (US$ 17 million) these are not really large investments and they cannot generate the employment that is needed overall. In any case the human resource available needs training and skills that are not in place. While the print and packaging industries are amongst the healthiest elements of the Indian economy, their relatively smaller entrepreneurs cannot carry the entire economy on their backs.

A corollary to this answer is that while one saw some modernization and automation of Indian equipment manufacturing at the recent Printpack exhibition, one saw a far higher level of distribution and rebadging of Chinese manufactured equipment. The Chinese, totally unlike the Indians, are masters of investment in manufacturing every equipment that has a market at a variety of technology levels and price.

This of course extends to their global success and penetration our industry as shown by Masterworks becoming one of the two largest anchor investors in the iconic Germany based Heidelberger Druckmaschinen. From buying some technology and having a distribution agreement with this icon, it has now become a significant owner. And not least because Heidelberg’s sheetfed offset press factory in China, is one of the best and most efficient printing press factories in the world.

Population, GDP, poverty and education in UP and Bangladesh

To come back to the GDP growth issue, something that has pointed out by leading commentators such as Partho Shome in the Business Standard recently, is that the key measures of growth are GDP to population and the extreme poverty headcount ratios (EPHR). The GDP growth rate in 2017 in India (population 1.339 billion) was 6.7%; Bangladesh (population 165 million) 7.3%; and, the north Indian state Uttar Pradesh (population 219 million) 6.4%. 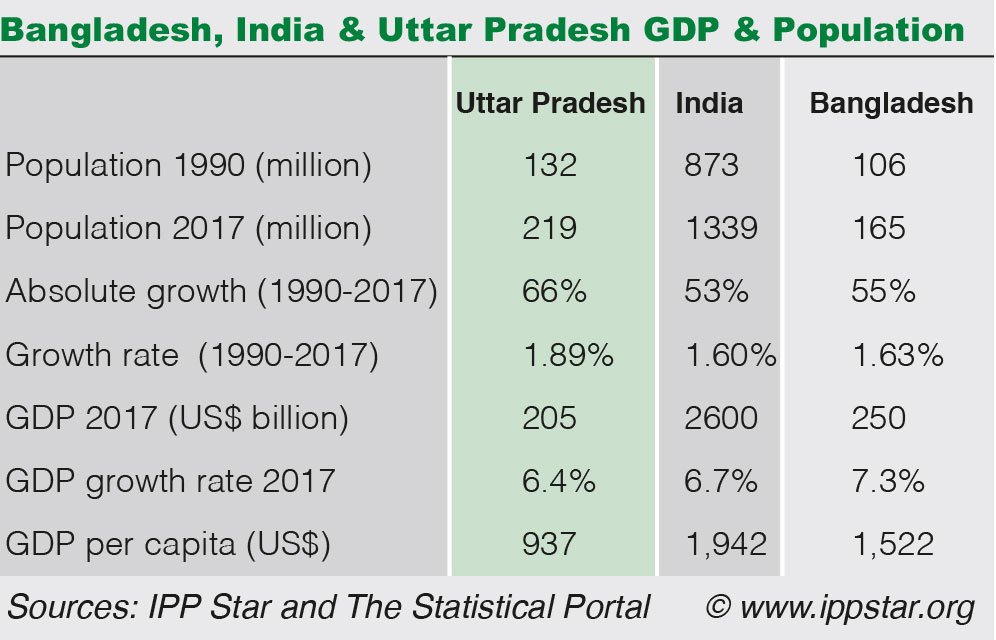 A recent education related survey by IppStar shows that the per capita consumption of school textbooks in Bangladesh is roughly 150% that of India. This kind of number reflects several challenges and opportunties – population growth accompanied by extreme poverty in India are not declining sufficiently. Secondly, there is a high disparity among Indian states. Lastly, there is a great opportunity in Indian education – we can begin by catching up to Bangladesh!
– Naresh Khanna editor@ippgroup.in