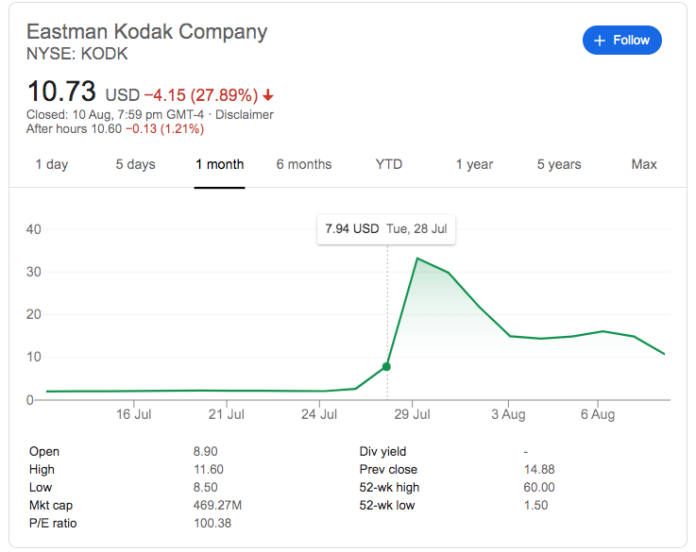 The US$ 765 loan IDFC loan to Kodak for producing pharma ingredients seems to have hit a snag with allegations being raised by the US senator fromMassachusetts Elizabeth Warren. In an open letter to SEC Chairman Jay Clayton, senator Warren urged the agency to investigate “potential incidents of insider trading prior to the 28 July 2020, public announcement of the Trump administration’s US$ 765 million loan to Eastman Kodak Co. (Kodak) to support the production of generic drug ingredients in response to the coronavirus disease 2019 (COVID-19) pandemic.”

The International Development Finance Corporation, which was to give the loan tweeted late on Friday 7 August 2020, “On July 28, we signed a Letter of Interest with Eastman Kodak. Recent allegations of wrongdoing raise serious concerns. We will not proceed any further unless these allegations are cleared.”

It is said that Kodak’s stock moved 25% the day before the news was officially disclosed. It is alleged that some stock options were awarded just a day before the loan became public. According to media reports, Kodak shared information on the loan with an agreed-on embargo news embargo with a few media outlets before the public announcement. It is reported that some of the media published the information in violation of the embargo before they were asked to delete it.

Meanwhile, Kodak says it has launched its own investigation by a select committee. The company said, “The committee, comprised of directors Jason New and William G. Parrett, will oversee an internal review of recent activity by the company and related parties in connection with the announcement of a potential loan by the US International Development Finance Corporation to support the launch of Kodak Pharmaceuticals.”