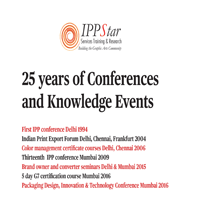 ABOUT US
The IPP Star group consists of two private limited companies. IPP Catalog Publications PL, with four B2B platforms in the print, publishing, and packaging verticals. And IPP Star, a consulting, training, and research company for these verticals in the Indian subcontinent. The group has been engaged in publishing and ethical consultancy services since 1979 and operates from its office in Noida in the New Delhi NCR.
FOLLOW US