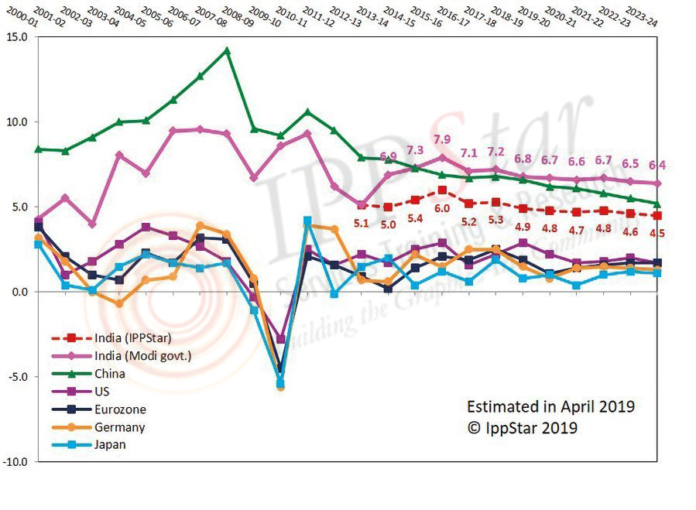 With the caveat that doing business is very different than writing about it, there is still some room for a conversation about Indian economic growth relating to the printing, publishing and packaging industries in the country. Our sister company, IppStar PL (www.ippstar.org), has researched the printing, publishing, and packaging verticals quite carefully over the past 20 years.

In our work, we make forecasts for ourselves and our clients. Although most predictions are based on primary information from face to face interviews of stratified samples of various segments, we also conduct many purposive sample interviews, of particular target segments and also of expert industry informants. In addition, we track and look at relevant economic data, for instance, investment in organized retail, or FMCG and other consumer product segments, even auto-industry growth and other data. We are always on the lookout for correlation and critical growth drivers for our industry verticals and segments. And within each of these verticals, we build models that relate and validate various parts of the supply chain.

Over the past 20 years, we have also tracked GDP growth in major global regions in comparison to Indian GDP growth. For instance, here we seek to learn from data of other developing countries, such as China, Brazil, or Indonesia. Based on a basket of research data inputs, our GDP forecasts are nevertheless our own – modified by the industry’s and economy’s feedback and first-hand data. We have learned a bit of economics, too – about the requisite savings and investment rates and their relationship to GDP growth.

Sometimes major packaging or printing companies tell us that GDP growth has nothing to do with their annual growth, which is generally and understandably much higher than the overall industry rate. At other times, to impress potential equity investors or their banks, they want us to ‘improve’ the GDP forecasts in research that they have paid for. Thus, it becomes incumbent on us to continually research and maintain our India GDP estimates in comparison to the other regions.

Last year amongst our other projects, we surveyed both a cross-section of printers and converters (across geographies, segments, and size) and a purposive sample of leading printers and converters (middle and big) on the relevance of India’s GDP growth rate to their own company’s growth. The results were surprisingly similar – 70% said there was a direct correlation, and 6% said there was an indirect impact.

Over 20 years of researching, the industry has given us some insights. One insight that we have shared with clients and publicly early on, is that without 6% GDP growth, we are unlikely to see any visible increase (read realistically bankable investing or risk-taking opportunity) in the print and packaging industries. An early insight in FY 2004-05 work, when both the economy and the industry were much smaller, we think that maybe we should revise this threshold a bit lower – for a bigger economy and a bigger industry.

Unfortunately, the Modi government’s constant fudging, juggling and re-juggling of GDP numbers have put the GDP growth numbers in doubt. Thus, we are hesitant even to revise or investigate this particular insight – one that over the years has been repeatedly confirmed by our expert industry informants. Since this number and base-year juggling has the economists spinning, you can imagine what it does to mere researchers with a single in-house mathematician-analyst looking at the granularity of a highly-fragmented industry.

Meanwhile, a senior economist with BJP leanings tells us that there is hardly a need for numbers, either to understand economics or to realize that the economy is in trouble, “Everything is down; nothing is growing.” And when I interject, “Except for smartphone consumption in 2019,” my renowned economist friend, says, “No, no, no, even that is in big trouble if you look at the impending bankruptcy of most of the telecom industry.”

The thrust of Modinomics is that there are political solutions to economic problems; that you can push large buttons and have improved financial and economic outcomes; that inflation and public debt are bad. There is no question that this government has unnecessarily controlled inflation and starved the urban and the rural economy of both growth and cash. As economists have pointed out, there is room to sustainably increase the debt to GDP ratio from 47.8% to 52.5% over the next three years.

As V Kumaraswamy wrote in the Business Line on 29 January 2019, one of the three reasons why the Indian economy is stagnant is “mistaking risk aversion for sustainability (of government debt and fiscal deficits). Our Fiscal Responsibility and Budget Management obligations are forcing the government to think more like an individual in retirement mode: pay off debts and resist fresh ones, as if its sources of income are to dry up soon.”

Kumaraswamy goes on to make several suggestions, of which I will mention only two. One, with a 13% nominal growth and 8% borrowing rate, the debt to GDP can be raised from 47.8% to 52.5%. The debt to GDP ratio is sustainable even at 60%, with an unutilized buffer of 7.5% (to be kept in case of disasters such as oil price spikes, natural disaster, or war).

Secondly, the fiscal deficit can be allowed to rise to 6% from its current target of 3.3%. In any case, the government’s target is neither achievable nor desirable. An honest or transparent fiscal deficit of 6% is sustainable, with nominal GDP growth levels rising to 13% at a debt to GDP ratio of 52.5%. This will have a marginal effect on taking inflation upward, which has already started rising in spite of the economic slowdown and a total absence of cash in the market (as both book printers and packaging converters confirm). However, unlike developed economies, our economy cannot afford the negative impact of lower inflation, lower fiscal deficits, and even weaker economic growth and demand.

The article was written on the morning of 1 February 2019, shortly before the budget was presented.