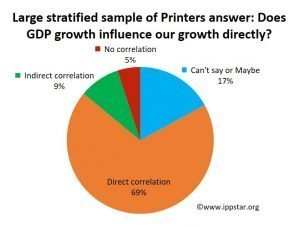 As the printing industry is well aware, our sister organization IppStar (IPP Services, Training and Research Pvt Ltd) www.ippstar.org has been researching the Indian publishing, print and packaging verticals for over two decades now. This work began in 1999, two years before IppStar PL was founded as a separate company for consulting and research in 2001. Our consulting work began around the time our first magazine was founded in 1979, and the magazines continue to work in a separate company.

Currently, IppStar is working on several projects – for single clients, on one multi-client study on the Indian label industry and on another study which combines two large surveys of a cross-section of the Indian printing, packaging and signage industries. The first of these is based on a stratified sample.

A stratified sample means one that is drawn randomly from a number of separate strata of the population (different geographical areas, different by the level of revenue) from the whole population, in order that it should be a representative cross-section. We are doing this across geographies, and across industry segments such as commercial and packaging and signage printers and across technologies such as offset, digital, flexo and gravure technology users.

After the data is collected, it is validated and appropriate weightage is given to various segments by our analyst Purva Dwivedi, who makes forecasts in relation to various other data such as capital accumulation and GDP growth projections. Plausibility checks and discussions with expert informants in the industry also take place.

The second survey is of a purposive sample, which means that it asks questions of a group of businesses about whom we are already knowledgeable and which may be considered growth-oriented. They stand out on the upper part of their segments and since they know we maintain their confidentiality, they generally give us excellent data and insights.

Suffice to say that IppStar’s projections of GDP growth are generally proven to be more exact than the chaotic numbers thrown out by the government and various banks and agencies. We are concerned about the role that GDP growth rates (actual and projected) play in print business growth and decision making and I will share a few preliminary insights into these from our stratified sample. Please keep in mind that this project is still ongoing and not yet complete.

When we asked this large cross-section of businesses about the effect of GDP performance and growth rates having an effect on the print industry, a surprisingly large number (69%) said there is a direct correlation while only 5% said there is no correlation at all. Another 9% said there is an indirect correlation while 6% said maybe or can’t say (Figure 1). Of course, our job as analysts is to take other evidence into account such as the growth rates past and projected by respondents, growth in consumption of print, consumables and the actual capacity creation in various segments. This is done in order to forecast growth for each segment or likely capital expenditure on each type of hardware, consumable or technology.

Among other questions, we are asking our current stratified sample of respondents about their intentions to diversify to other segments of the industry. A large number (32%) is definite about its intention to diversify and an equally large number (63%) says no while only five 5% is at the ‘can’t say’ or ‘maybe’ stage. Please keep in mind that these are fairly raw numbers and still incomplete in terms of true diversity and there is a margin of error.

Remarkably or maybe not most of IppStar’s clients are global companies although we have had over the years several Indian clients mostly looking to validate their projects. Our label industry survey done almost 20 years ago still finds its graphs and tables in many label expansion projects although it is hugely outdated.

What is needed is for the industry to wholeheartedly support IppStar’s research activities. Instead, it continues to cut and paste any stuff it can find for free on the internet and often propagate these erroneous and meaningless numbers. Printers who are caretakers of data and are supposed to add value to data to prevent counterfeiting need to invest in real data and research in order to have bankable projects and to take manageable risks instead of relying on emotional and copycat ideas for growth.